UFO incursions at U.S. atomic/thermonuclear weapons sites, extending from the 1940s to nearly the present day, are well-established. Hundreds of U.S. military veterans and thousands of declassified Army, Air Force, Navy, FBI, and CIA documents make reference to these incidents. In fact, it can now be said that UFOs apparently monitored our atomic weapons program even before Hiroshima and Nagasaki were bombed in August 1945.

During the war, Clarence R. “Bud” Clem was a Lieutenant Junior Grade in the U.S. Naval Reserves, serving as an F6F Hellcat fighter pilot assigned to Air Group 50 aboard the U.S.S. Cowpens CVL-25. In an April 2, 2009 email, Clem told me:

Our group was deployed to NAS (Naval Air Station) Pasco, Washington for ground support training in March 1945. The Hanford Ordnance Works was just across the Columbia River from Pasco and designated Top Secret. We experienced an unknown object over the Hanford site in March/April, 1945. I did not fly after the object, as two members of our squadron did, but I did assist in trying to determine what was going on. I am 84 and I do not know if any other members of our squadron are still alive [who] could add more information. If you have any information about our experience, I would like to see what the official report stated.

The Hanford site was the plutonium-production plant that manufactured the fissile material used in the first atomic bomb—exploded on July 16, 1945, near Alamogordo, New Mexico—as well as in the bomb dropped on Nagasaki, Japan three weeks later, on August 9th. I wrote back to Clem, saying that I didn’t have any official reports relating to the incident at Hanford and asked for more details. He responded:

One night, shortly after the evening meal, the officers were gathered at the Officers Club for relaxation when the duty officer at the tower called our commander with a request. Lt. Commander Richard Brown took the call, as the Captain was in conference. Ensign C.T. Neal and I were with Brown and he asked us if we would volunteer to go with him to the flight line for possible duty. We both agreed and a jeep was waiting at the door to take us to the flight line. We learned that an unknown ‘bogey’ was over the Hanford Ordnance Works, according to the radar operator located at an auxiliary field just across the Columbia River from Hanford reservation.

We had been instructed upon arrival that the Hanford Ordnance Works was Top Secret and no flights over any part were permitted … We did not know about the radar, but the duty officer stated that something was in the sky over the area and wanted someone to investigate. A plane was [already] armed and warmed-up on the tarmac. Brown stated he would go and Neal was to stand-by in another plane, in case of trouble. I was to join the [controller] in the tower and communicate info from radar to the pilots.

Brown quickly found the object, a bright ball of fire, and took chase. But he could not close [on it], even with water injection that gave a quick boost in speed. The object headed out NW towards Seattle and was quickly lost by radar. Brown returned to base and we three retired to the club, still shaking and wondering what we had encountered. Memory does not recall details of two similar experiences—I think Neal was to take the next chase—but the object disappeared before he got airborne. I was assigned to fly the entire [Hanford] reservation at low altitude (200 feet or so) to give the radar operator the blind spots [caused by the terrain] …

I do not know if any other incidents occurred after we left Washington. None of the above information was mentioned in the ‘history’ of our squadron but I wonder what is on record at NAS Pasco.

I asked Clem, “During the first incident, how long did it take for the aircraft to get to Hanford?” He replied, “Not long. An aircraft was always ready to fly on short notice to intercept the Japanese incendiary balloons. If you’ve read the history of that project, and the concern the balloons caused, it would have been logical to intercept them before they could reach Hanford.”

I asked Clem if the pilot on the first night, Lt. Commander Brown, had described the object in detail, either over the radio or back at the Officers Club. Clem replied, “He just said it was so bright that you could hardly look directly at it. As he closed on it, it took off to the northwest at a high rate of speed. No maneuvers really, just a straight-line course.”

Other questions to Clem added few details. He later sent me his military records which revealed that his fighter squadron was actually at Pasco from January 9 to February 15, 1945, not during March and April, as he had first indicated. This fact is important in light of subsequent developments.

On July 6, 2014, UFO historian Jan Aldrich wrote to me saying that his research group, Project 1947, had secured documents from Headquarters Fourth Air Force, written during the war, which referred to overflights of the Hanford site by “unidentified aircraft”. One of them, dated January 23, 1945, and directed to the Commanding General of the Army Air Forces and the Assistant Chief of Air Staff, Training, states:

Resulting from an unidentified aircraft flying over the Hanford Engineering Company Plant at Pasco, Wash. on at least three nights in the past month (this Company is engaged in undisclosed projects for the War and Navy Departments) this HQ was requested by [Western Defense Command], about ten days ago, to move one [battery] of searchlights from Seattle to the Pasco plant. The Thirteenth Naval District has made arrangements for Naval Air Station, Pasco, to employ both radar and fighter aircraft in attempting interception of these unidentified aircraft. The airspace over the Hanford Company is both a Danger area and a Restricted area. Our battery of searchlights has been in place since 15 January; one incident has occurred since that date in which a brief radar contact was made—attempted night interception again failed.

So here we have an official document referring to one or more unidentified aircraft flying over the Top Secret Hanford atomic materials production plant on three occasions between late December 1944 and late January 1945. At least one of those “aircraft” was tracked on radar and successfully eluded the U.S. Navy fighter sent up to intercept it.

Western Defense Command and Army Commands represented at the Hanford Engineering Co, Pasco, have informally asked HQ Fourth Air Force for one or more night fighter aircraft to be based, temporarily, at Naval Air Station, Pasco, for employment against the alleged "bogie" which has been detected by radar on several nights in the past three weeks.

Here we learn that the radar trackings of the unidentified aircraft occurred more than once. No known records exist which confirm that any Japanese fixed-winged aircraft ever overflew the Hanford site. Regarding the balloon bombs, on March 10, 1945, one of them descended near the facility, resulting in a short circuit in the power lines supplying electricity for the nuclear reactor’s cooling pumps, but power was quickly restored.

In any case, given Bud Clem’s description of the object that outran Lt. Commander Brown, it seems highly unlikely that it was Japanese in origin. Once again, Clem told me, “[Brown] just said it was so bright that you could hardly look directly at it. As he closed on it, it took off to the northwest at a high rate of speed. No maneuvers really, just a straight-line course.”

Given the available data, it appears that bona fide UFOs were in fact operating near the Hanford site in early 1945, only months prior to the attacks on Hiroshima and Nagasaki. If this was the case, one might ask if the unknown craft—whether piloted or remote-controlled—were also monitoring other operations associated with the U.S. atomic weapons program.

Indeed, one might wonder whether UFOs were present during the atomic attacks themselves! It must be stressed that no credible evidence is available which would substantiate this possibility, however, military records confirming sightings of the orb-like “Foo Fighters” by U.S. Army Air Force bomber crews on missions over Japan, during the early months of 1945, are a matter-of-record. 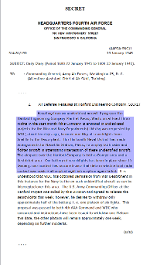